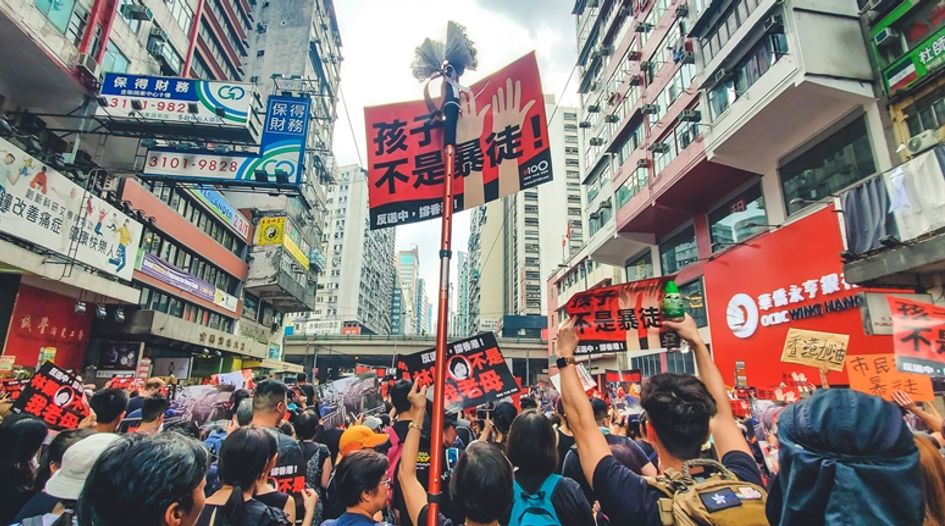 The NSL was enacted earlier this year in response to the mass protests which roiled Hong Kong over the course of 2019 (Credit: Tee Jz on shutterstock)

The Hong Kong Monetary Authority has told banks they should report violations of the territory’s controversial National Security Law as they would anti-money laundering/counter-financing of terrorism violations.

The HKMA posted a “frequently asked questions” document on Hong Kong’s AML/CFT regime issued on 30 September, containing two answers to questions that presuppose a duty to report potential offences under the new law.

The document is authored by the Hong Kong Association of Banks (HKAB), a statutory body to which all licensed banks in the territory are required to belong, with input from the HKMA.

In the document, the HKMA now says institutions will be obliged to report transactions to its Joint Financial Intelligence Unit (JFIU) “as soon as reasonably practicable” after they know or suspect the property is related to an offence under the NSL.

It also adds that it will be “enhancing” the JFIU’s reporting mechanism to include a special category for NSL-related offences.

The HKMA says banks are “expected to be fully conversant” with the FAQs. The regulator is still yet to circulate formal guidance on the application of the new law.

The National People’s Congress Standing Committee – the Beijing-based legislative committee that is the highest authority on interpreting Hong Kong’s Basic Law – enacted the law in June, following widespread protests over the course of 2019 against a since-aborted law that would have allowed extradition of Hong Kong residents to mainland China.

The law criminalises secession, subversion against the Chinese government, and collusion with foreign forces, with sentences ranging from three years to life. It also gives the mainland government the power to interpret the law. The law defines secession and subversion broadly, giving rise to concerns it could be used to criminalise anti-mainland speech.

It has received significant pushback among civil society in Hong Kong, including by the Hong Kong Bar Association, which warned the law undermined Hong Kong’s independent judiciary and that the crimes it created were “vaguely defined”. One of the Court of Final Appeal’s non-permanent judges, James Spigelman of Australia, resigned last month citing the law.

Eddie Yue, the HKMA’s chief executive, initially gave assurances in June that the NSL would “not bring any change to our monetary and financial systems”.

And in July the Securities & Futures Commission (SFC)’s chief executive Ashley Alder released a statement defending the “free flow of all the multiple categories of information that are essential to preserving market integrity and fairness”. He added that the SFC “is not aware of any aspect of the NSL which would affect or alter” how firms handle financial market and business information.

The NSL has also provoked concerns among banks that they could be caught between conflicting regimes. The United States imposed a set of sanctions against an array of individuals in Hong Kong and China, including the territory’s chief executive Carrie Lam, in the wake of the law’s passage, but practitioners have signalled fears that compliance with the sanctions may put banks in breach of the NSL’s collusion and subversion provisions.

The HKMA circulated guidance in August emphasising that US sanctions “have no legal status in Hong Kong”. It said banks considering whether to lend to sanctioned persons had an obligation to treat customers fairly, but also that banks should consider “all risks involved”.

A Cleary Gottlieb client note published in August, authored by partners Paul Marquardt and Chase Kaniecki with associate Samuel Chang, noted that the HKMA generally takes a “balanced, risk-based approach”. It said the HKMA guidance would be consistent with an approach that, for instance, found an acceptable level of risk in lending to a company controlled by a sanctioned person, but not in directly operating a checking account for that person.

“While there will be no guarantee that either authority will accept the path an institution chooses to walk, historical experience is that a path toward balancing competing risks and considerations exists and is wider than might seem to be the case,” it concluded.