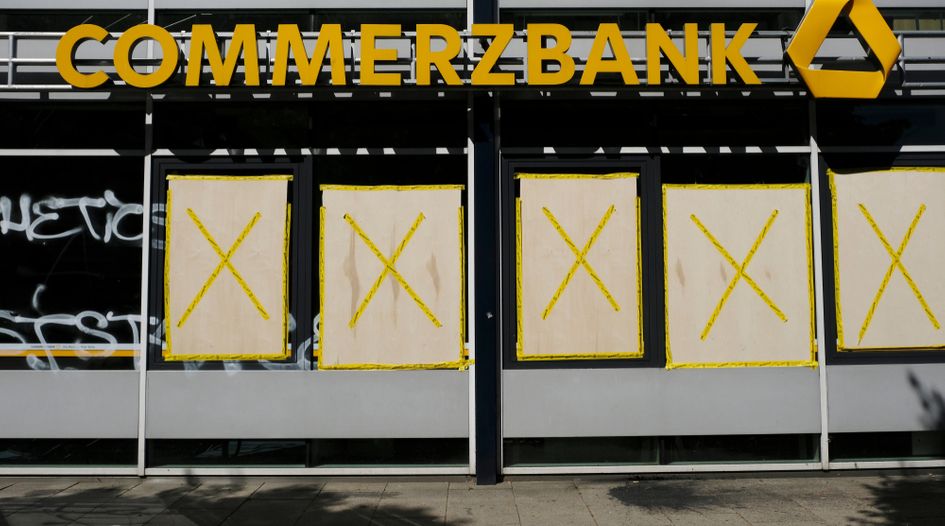 The Cypriot securities regulator has fined Germany’s Commerzbank €650,000 after finding it helped inflate the share price of a defunct local bank, in what is thought to be the largest case of market manipulation ever investigated on the island.

On 3 July the Cyprus Securities and Exchange Commission (CySEC) announced the fine following a six-year investigation.

Cypriot bank Marfin-Egnatia, at that time a Laiki subsidiary, was the index sponsor responsible for the composition of the portfolio in question.

Marfin-Egnatia merged with its parent in 2011, allowing Laiki to then become the index sponsor. CySEC said this created a conflict of interest.

The regulator said that on several occasions in 2011 both banks used one of the structured products as a vehicle for Commerzbank to “act as a surrogate of CPB in a disguised manner and act in concert to manipulate the market in relation to CPB’s shares”.

Commerzbank has 75 days to appeal the fine. A spokesperson for the bank tells GBRR it is “examining the order and reviewing what steps [to] take to determine the best course of action”.

The report shows that Laiki regularly gave orders to Commerzbank through a specific employee for the acquisition of its own shares, specifying the price, and in some cases the details of the order submission to the Athens Stock Exchange.

According to documents released by CySEC, the orders were regularly made by traders communicating via a chat platform operated by Bloomberg.

CySEC noted that the acquisition of Laiki shares “usually took place at specific points in time, in a certain way aimed at ensuring the share price fixing in accordance with CPB’s daily target.”

It added that the orders did not correspond to investors’ interest, but to "fictitious demand that was covertly created by the issuer of the shares."

While it fined Commerzbank the regulator stopped short of imposing a fine on Laiki, which has been under resolution and special administration since it was wound down in 2013 during Cyprus’s financial crisis – a process which saw depositors face a combined €4 billion haircut. The regulator reasoned that it did not want to put a burden on former depositors, bondholders and shareholders.

CySEC added that the €650,000 fine against Commerzbank took into account the fact the violations occurred over eight years ago.

It also highlighted that it had worked in cooperation with its counterparts BaFin in Germany, the Hellenic Capital Market Commission in Greece, and the UK’s Financial Conduct Authority (FCA), during the investigation.

On social media, CySEC head Demetra Kalogerou said the fine that followed a six-year-long investigation was “better late than never”.

The probe began after Cypriot lawmaker Irene Charalambides, of the left-wing AKEL party, alerted CySEC and the attorney general to email correspondence between Laiki and Commerzbank traders in 2013.

CySEC began examining a possible violation of Article 19 of Cyprus’s insider dealing and market manipulation statute, focusing on how the deals may have broken laws that forbid a company from purchasing its own stock.

Reacting to the sanction, Charalambides said she welcomed the move and suggested Cyprus’s central bank initiate a civil lawsuit against Commerzbank.

“[This would be] to ensure that the funds channelled to these structured bonds are returned to depositors,” she said in a statement.

Charalambides tells GBRR she thinks Commerzbank could also face legal action from depositors and shareholders themselves.

“I can only tell you that if I was in their shoes, I would proceed. They should demand the capital that was invested for the manipulation of the shares through Commerzbank to be returned to Marfin Laiki clients who suffered the haircut [during the 2013 crisis],” she says.

Charalambides came under fire in the media from Andreas Vgenopoulos, the late founder of the Marfin Investment Group, on several occasions. “We were on to him, and that is the reason why he began attacking me,” she added.

Charalambides tells GBRR she understands from CySEC this was largest case of market manipulation ever investigated in Cyprus.

In a separate development, Commerzbank CEO Martin Zielke announced on 3 July his early resignation from the role on the basis of a “mutual termination” of his board membership.

“I would like to open the way for a fresh start. The bank needs a profound transformation and a new CEO, who will get the necessary time from the markets to implement a strategy,” he said in a press release.

Commerzbank’s board chairman Stefan Schmittmann also announced he would leave his position on the same day, taking effect on 3 August.

In June, the FCA announced it would fine Commerzbank’s London arm a total of £37.8 million for failing to establish robust anti-money laundering controls.