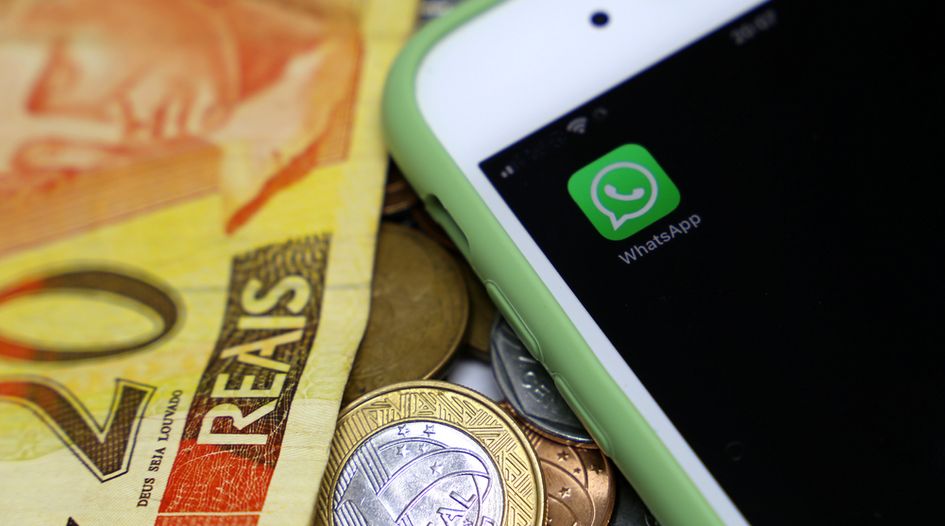 UPDATED WITH COUNSEL: WhatsApp’s payments platform in Brazil has won regulatory approval to operate, nearly a year after the central bank shut down its operations within days of launch.

The payments platform went live on 4 May after gaining approval from Banco Central do Brasil (BCB) to become a payments initiator a month earlier.

WhatsApp initially launched the service, which is powered by Facebook Pay, last June. But days later the regulator suspended the platform amid reports it had not received an official launch request – despite WhatsApp claiming it had showed the central bank its launch plans beforehand.

The BCB also said that as well as competition and data privacy worries, officials had voiced concerns over whether WhatsApp required a licence as a company offering payment services.

WhatsApp initially contracted both Visa and Mastercard – already licensed by the BCB – to carry out money transfers on the platform as a way of circumventing the capital reserve and other regulatory requirements applied to payment companies.

But for its second try WhatsApp’s owner Facebook established Facebook Pagamentos do Brasil – a financial services company fully regulated by the central bank and subject to its requirements – to provide the WhatsApp payments service.

In response to WhatsApp's first launch attempt, the BCB published a resolution requiring payment institutions that issue electronic money to obtain central bank approval before launching operations. The resolution took effect in March, and also introduced a new category of payments institution – that of payments initiator – which Facebook Pagamentos now operates as.

Visa and Mastercard will still act as payment arrangers, and have also received approval from BCB to do so. The platform is currently exclusively available for consumers, and WhatsApp will require separate authorisation for merchants.

Pinheiro Neto, led by partner Bruno Balduccini, advised both WhatsApp and Mastercard in talks with the BCB to re-launch the platform after it was first halted.

Balduccini tells GBRR that when Facebook first launched the platform, the lack of relevant regulation meant that Facebook was "free to start, but it was at that moment the BCB decided to better understand the consequences of Facebook Pay in Brazil".

"For this reason the BCB amended its regulations in order to have the statutory power to stop the process and drafted the regulation," he adds.

Balduccini says the firm helped Facebook Pagamentos to develop "all necessary manuals, contracts and structures necessary" for it to comply with the new payment institution regulations, as well as advising on compliance with Bank Secrecy rules.

David Marcus, co-creator and board member of Facebook’s cryptocurrency project Diem, said in a tweet on 4 May that WhatsApp’s platform in Brazil will be rolled out gradually. “Enabling people in Brazil to pay one another in conversations as easily as sending a text message is going to be so useful”, he wrote.

The platform will allow customers of Banco do Brasil, Bradesco, Itaú, Mercado Pago and Nubank, among others, to send up to 1,000 reais (US$185) per transaction and receive 20 transfers per day, with a limit of 5,000 reais (US$925) per month.

WhatsApp’s false start last year came shortly before the BCB announced a launch date of its own instant payments platform in August, PIX, which is integrated among banks, payments and financial institutions, apps and fintechs.

Counsel to WhatsApp and Mastercard