How to challenge the ECB: Lessons from first EU court cases on the SSM

The Single Supervisory Mechanism (SSM) refers to the system of banking supervision in Europe that comprises the European Central Bank (ECB) and the national supervisory authorities of the participating countries. The ECB became the lead supervisor of the SSM in 2014 and currently directly supervises 116 ‘significant' banks accounting for 82% of banking assets in the euro area.

Application and interpretation of national law

In general, the EC's examination of the merits is restricted to the arguments brought forward by the applicant. This holds true for most reasons possibly rendering an EU act invalid, e.g. error of law and disproportionality. To be heard by the EC, the applicant will always have to make an explicit plea of illegality of the underlying provision (T-122/15, para 38; T-52/16, paras 80, 151). Where a plea of illegality is raised within the meaning of Art. 277 TFEU, it is for the court alone to review its consistency with the provisions of the EU primary and secondary law (T-733/16, para 35).

Proportionality means that the content and form of an EU legal act is not to exceed what is necessary to attain the objectives of EU law. Both the L-Bank and the Crédit Mutuel Arkéa cases addressed the proportionality principle.

In the L-Bank case, the EC stated that the principle of proportionality had already been taken into account by the legislator and, therefore, could not additionally be applied in the individual case. To support this view, the EC also put forward the allocation of responsibilities between the supervisory authorities, enshrined in the SSM Regulation.

In the Crédit Mutuel Arkéa case, the EC defined proportionality in the supervisory context. It stated that acts adopted by EU institutions must be appropriate for attaining the legitimate objectives pursued by the legislation at issue and must not exceed the limits of what is necessary in order to achieve those objectives. Where there is a choice between several appropriate measures, recourse must be had to the least onerous, and the disadvantages caused must not be disproportionate to the aims pursued (T-52/16, para 200).

Many prudential rules under EU law provide for supervisory discretion, e.g. by referring technical and risk-related assessments or offering a choice of actions to the supervisors. Under general EU procedural principles, the Union courts have limited power to review discretionary decisions. This has now been confirmed by the EC with regard to discretionary decisions by the ECB. This is important for claimants from national jurisdictions, such as Germany, where the courts traditionally exercise a stronger scrutiny of administrative decisions. The EU courts limit their scope of judicial control to reviewing whether a discretionary decision: 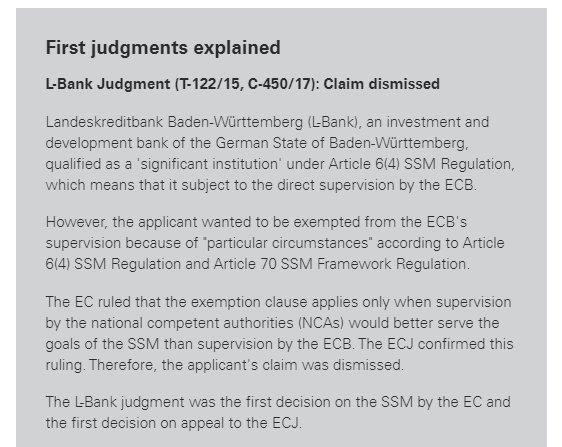 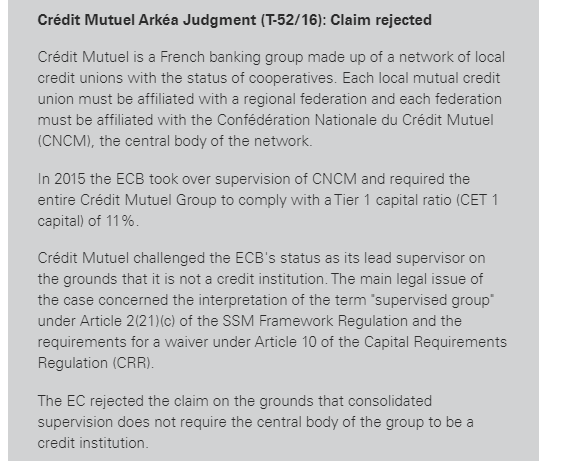 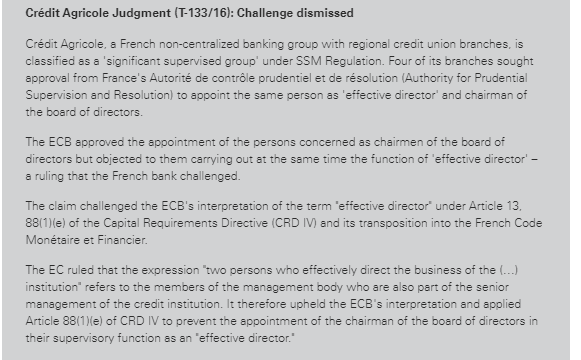