Very shortly, the U.S.-based Alternative Reference Rates Committee (ARRC) will make its much-anticipated formal recommendation of forward-looking term Secured Overnight Financing Rates (Term SOFR) administered by the CME Group. This recommendation, together with a series of recommended loan conventions and best practices published by ARRC, mark an important milestone in the transition from USD LIBOR to SOFR.

Term SOFR is an attractive replacement for USD LIBOR because, like LIBOR, Term SOFR allows borrowers and lenders to know the benchmark interest rate on a loan at the beginning (as opposed to near the end) of each interest period by simply looking at the relevant Bloomberg/Reuters page. These features facilitate borrowers’ cashflow and liquidity management and provide operational and systems convenience for all concerned.

ARRC’s formal recommendation of the CME Group’s Term SOFR reference rates and its recent publication of recommended Term SOFR loan conventions and best practices mean that market participants should have what they need to use Term SOFR in syndicated and bilateral loans.

We expect Term SOFR to be a popular choice (particularly among lenders in Asia) because of its notable operational and other advantages over complex and document-intensive backward-looking SOFR calculation methodologies, which do not allow borrowers and lenders to know the benchmark interest rate on a loan until about a week (depending on the length of the lookback period) before interest payment is due at the end of the interest period.

In the U.S. loan market, ARRC’s recommended contractual fallback language already places Term SOFR at the top of the benchmark replacement waterfall. In the international loan market, while the LMA’s/APLMA’s standard documentation (which are based on recommendations made by the UK-based Sterling Working Group as opposed to ARRC) currently do not contain a fallback to Term SOFR, adjustments can be made to any loan document to achieve this outcome.

SOFR is a benchmark rate administered by the Federal Reserve Bank of New York (New York Fed) which has been selected to replace USD LIBOR. SOFR itself is a backward-looking overnight rate because it is based on overnight transactions in the U.S. Treasury repo market. The backward-looking nature of SOFR means that it is not possible to know tomorrow’s SOFR – it is only possible to know the previous business day’s SOFR.

In contrast, Term SOFR is a forward-looking rate based on transactions in the large and growing SOFR derivatives markets, including SOFR futures and SOFR overnight index swaps (OIS) transactions. In other words, Term SOFR (which is forward-looking) reflects the SOFR derivative market’s expectations as to what will happen to interest rates, while overnight SOFR (which is itself backward-looking) reflects what actually did happen to interest rates overnight. Where there is a deep and liquid SOFR derivatives market, market expectations are generally close to actual movement in interest rates, which is what makes Term SOFR sufficiently reliable to receive ARRC’s endorsement.

2. Term SOFR reference rates to be recommended by ARRC

Further information about the CME Term SOFR Reference Rates, including their calculation methodology, how to access them and their compliance with the IOSCO Principles for Financial Benchmarks and other benchmark regulations are available on the CME Group’s webpage[3].

3. Why Term SOFR is an attractive alternative to backward-looking SOFR calculation methodologies

The inherently backward-looking nature of overnight SOFR presents unique LIBOR transition challenges for commercial loan markets which have, for the past 30 years, relied on forward-looking term LIBOR reference rates which are easily obtainable on Bloomberg/Reuters screens and enable the benchmark interest rate on a loan to be known at the beginning of each interest period.

In particular, the following cash management, operational, systems and documentation challenges associated with backward-looking SOFR calculation methodologies are what makes Term SOFR so attractive to lenders and borrowers.

As discussed below, the abovementioned cashflow management, operational, systems and legal documentation issues generally do not exist for Term SOFR, the loan conventions for which are similar to existing LIBOR loan conventions because they are both forward-looking term rates that appear on a Bloomberg/Reuters screen.

ARRC’s recommended Term SOFR loan conventions are voluntary and may not be applicable to all commercial loans. Each market participant should decide for itself whether and to what extent to use these recommended conventions in its transactions.

5. ARRC’s recommended best practices about when to use Term SOFR

ARRC’s recommended best practices[7] reflect the principle that the use of Term SOFR should be in proportion to the depth of transactions in the underlying derivatives market and should not materially detract from volumes in the underlying SOFR-linked derivatives transactions that are relied upon to construct the Term SOFR itself. ARRC notes that its recommended best practices are voluntary and that each market participant should make its own independent evaluation and decision about whether or to what extent any recommendation is adopted.

ARRC’s recommended best practices about when to use Term SOFR distinguish between new and legacy transactions and between product types, as summarised in the table immediately below and as discussed in greater detail further below. 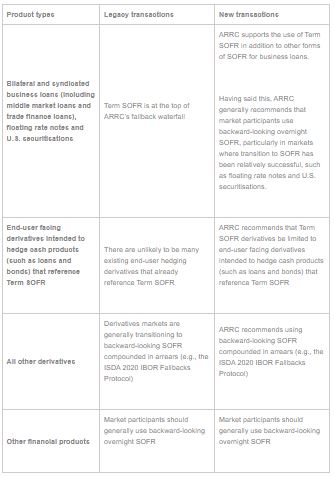 ARRC’s recommended best practices for using Term SOFR in legacy transactions: ARRC notes that its recommended contract fallback provisions for floating rate notes, bilateral and syndicated business loans and securitisation transactions already place Term SOFR at the top of the fallback waterfall. This means that legacy contracts which have adopted ARRC’s fallback language without modification will, if the relevant tenor exists, fall back to the applicable Term SOFR once the contractual LIBOR replacement date occurs. ARRC also notes that under New York’s ‘legislative solution’ to tough legacy LIBOR contracts, LIBOR-based instruments governed by New York law that do not provide effective fallbacks will transition to the applicable SOFR-based rate recommended by ARRC. ARRC states that it expects to make recommendations for the New York legislation that are consistent with its contract fallback provisions.

ARRC’s recommended best practices for using Term SOFR in new transactions: In terms of new transactions, ARRC generally recommends that market participants use backward-looking overnight SOFR, particularly in markets where transition to SOFR has been relatively successful, such as floating rate notes, U.S. consumer loans and securitisations. However, ARRC also acknowledges that the use of backward-looking overnight SOFR has presented particular challenges for loan markets.

Accordingly, ARRC supports the use of Term SOFR in addition to other forms of SOFR for business loans, particularly syndicated facilities, middle market loans and trade finance loans. ARRC also recognises that Term SOFR may also be appropriate for certain securitisations that hold underlying business loans or other assets that reference Term SOFR.

6. Use of Term SOFR in loan documents

Since the CME Term SOFR Reference Rates are screen rates that are available on the relevant Bloomberg/Reuters page, they can be incorporated into a loan agreement (including LMA/APLMA standard documentation) in a similar manner to how legacy loan agreements incorporated LIBOR screen rates. While the legal documentation exercise may not be as complex as fully documenting the non-cumulative compounding methodology, loan documents referencing Term SOFR should be carefully crafted to: (1) reflect appropriate Term SOFR loan conventions; (2) include robust fallback provisions and, if applicable, rate switch mechanisms; and (3) contain future-proof definitions of Term SOFR and other key concepts.