On 27 December 2019, Bank Negara Malaysia (BNM) has issued an exposure draft on the Licensing Framework for Digital Banks (Exposure Draft).

According to BNM, up to five licences may be issued to applicants to establish digital banks that conduct either conventional or Islamic banking business in Malaysia.

BNM’s move to promote the development of digital banks is in line with the direction taken by regulators in Singapore and Hong Kong, which have each issued similar licensing frameworks in the past two years.

What are digital banks

Digital banks (also known as virtual banks) primarily deliver banking services through digital channels such as the internet with minimal (if any) brick-and-mortar presence.

BNM has proposed to adopt a phased approach for the regulation of licensed digital banks.

The first phase (Foundational Phase) will last for a minimum of three years or up to a maximum of five years, during which, simplified regulatory requirements (including capital adequacy, liquidity stress testing and public disclosure) will apply.

During the Foundational Phase, a licensed digital bank is required to:

After three years from the commencement of its operations, a licensed digital bank may apply to BNM for the Foundational Phase to end, and for the limitation on total asset size to be uplifted.

By the end of the fifth year from the commencement of their operation, all licensed digital banks will be required to comply with all equivalent regulatory requirements applicable to a licensed bank or licensed Islamic bank. A minimum amount of capital funds of RM300 million must be achieved, while the limitation on total asset size will no longer be applicable.

A licensed digital bank which fails to fulfil any such requirements by the end of the fifth year from the commencement of its operation may be subject to enforcement action, including a direction to implement its exit plan or a revocation of its licence.

Non-bank players may apply for a digital bank licence. However, BNM may require a shareholder who holds an aggregate interest in shares of 50% or more in a proposed licensed digital bank to organise all its financial and financial-related subsidiaries under a financial group, headed by a single apex entity, which should be either:

Licensed banks and licensed Islamic banks may also apply for a digital bank licence separate from their current licensed entity should they wish to carry on digital banking business or Islamic digital banking business in a joint venture with other parties. However, this does not preclude licensed banks and licensed Islamic banks from digitalising their current business operations, as this remains within the scope of their existing banking licence. While the Exposure Draft does not expressly rule out non-Malaysian parties from submitting an application, applications where the controlling equity interest in the proposed licensed digital bank resides with Malaysians will be given preference.

In assessing the eligibility of applicants, BNM has proposed to consider the following criteria:

To fulfil the “best interest of Malaysia” criterion, applicants are required to show a commitment in driving financial inclusion, including ensuring quality access and responsible usage of financial services, particularly to underserved and hard-to reach segments that may be unserved, which includes retail as well as micro, small and medium enterprises.

The suitability of the shareholders of the proposed licensed digital banks will also be assessed, having regard to the following criteria:

BNM has stated that it aims to finalise a Policy Document by the first half of 2020, with licence applications being open upon issuance of the Policy Document. 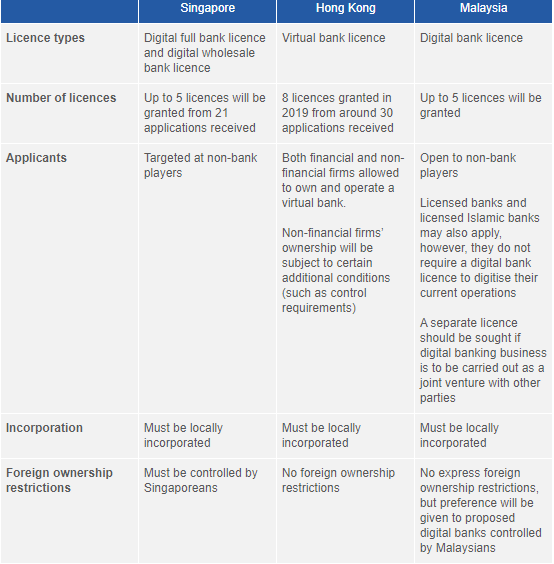 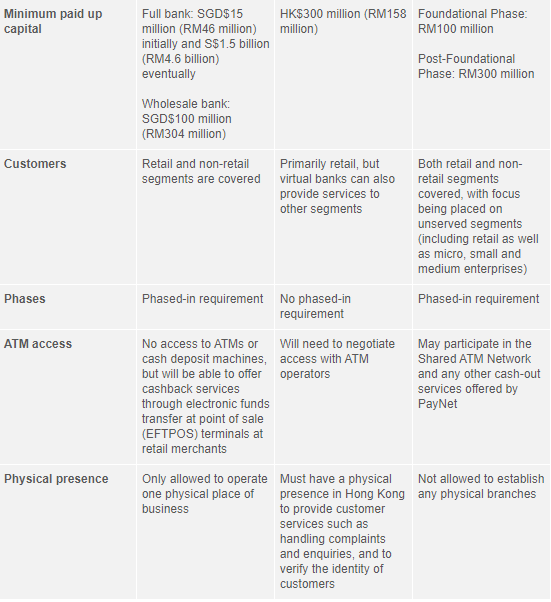